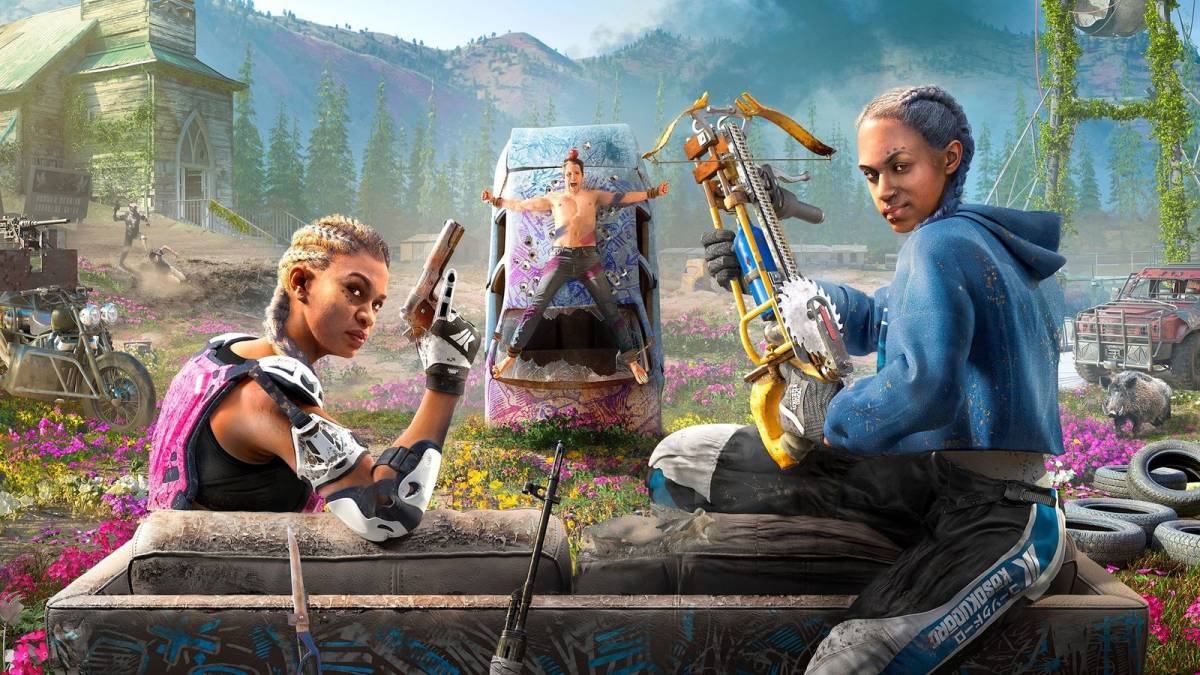 What was it like working together to compose the soundtrack?

John Swihart: Tyler and I have been friends for 10 years, so I was psyched to do a project with him. Tyler does so many epic projects that I knew this would be a lot of fun. The level of trust, respect, and the value of our friendship made the collaboration a really fun process. Tyler is one of my favorite humans.

Tyler Bates: Likewise! John is a great composer and a great guy. We had talked about collaborating on something for a long time, and this seemed like the perfect opportunity. I was especially excited because I know that John has so much more in his bag than what he’s sometimes called upon to write.

What did the development team show you of Far Cry New Dawn before you started to work?

TB: The team at Ubisoft gave us an outline of the story and planetary conditions, along with about 50 images – including a presentation of what the world would look like 15 years after the nuclear apocalypse. They emphasized the makeshift nature of the weaponry, and the lawlessness that would occur when the invading force of the consuming Highwaymen would enter the then-peaceful area. All of this is set to the backdrop of half-destroyed buildings and the natural beauty of the superbloom.

JS: «Makeshift» and «Wild West» were the words that I felt really described what the music needed to reflect. We would have to represent the kind of pieced-together instruments that one might expect to find after an apocalypse. Central to the sound were some broken guitars, bowed instruments, and improvised percussion, along with some rebuilt electronic instruments.

TB: We definitely didn’t want to take that to an extreme and make the score completely out of improvised instruments, but instead make those the main melodic instruments. There’s a bended note motif that is one of the themes that was developed throughout the game. A lot of the different themes come from a permutation of that idea.

Above: Tyler Bates has lent his musical talents to such projects as Deadpool 2, John Wick, and two Marilyn Manson albums.

Did you draw inspiration from things outside of the game?

TB: I like to work with live audio as much as I can, and I know John does too. In this case, I don’t mean recording an ensemble – because that doesn’t fit with this game – but rather manipulating sounds from my guitar, the guitarviol, and a number of awesome instruments John has in order to make something unique. I looked to those instruments for inspiration.

JS: The team at Ubisoft wanted to have a trap-influenced vibe to the score, so some darker trap-influenced artists, like Ghostemane for example, provided some inspiration for the rhythms and dark harmonic content. We also were able to draw on some classic Morricone-style spaghetti western melodies and chord progressions to help create drama and singability.

Above: John Swihart’s work for TV and movies can be heard in Napoleon Dynamite, How I Met Your Mother, and Go On.

Far Cry New Dawn is a different, more vibrant and colorful post-apocalypse. Is that something you wanted to bring across in the music? If so, how did you reflect that?

TB: We didn’t feel the need to go super dark and focus on low frequency all the time, although there’s definitely a lot of that. We kept a good balance across the frequency range – we weren’t afraid of mids and highs. I feel this is similar to the Far Cry team’s approach to the post-apocalyptic genre: they chose a bright and colorful experience, and so did we.

JS: The superbloom is a big element in the game, so we had to match the beauty and organic nature of the surroundings. We used a northwestern hammered dulcimer to create some textured effects that sonically represented the vibrancy of the superbloom.

Is there an instrument or family of instruments that you centered the soundtrack around? Did you try to identify characters with certain instruments?

JS: Guitar is such a portable instrument [that] it was easy to imagine some rebuilt guitars in this world. Tyler introduced me to the guitarviol years ago, and this instrument was a great resource for the project. Its visceral and primitive nature is very unique. We also had some electric violin screeching at times.

TB: The locations really inspired different sounds in the score, as much as some of the characters.

JS: The exploration cues had the hammered dulcimer textures. I have an old Santoor – the dulcimer’s larger cousin – that we also sampled and reworked for some of the threatening sounds for the twins.

Did you learn any new instruments or techniques while composing the soundtrack?

JS: Creating the «makeshift» types of sounds was a big challenge. There were a lot of time-consuming experiments that eventually yielded some inspiring sounds. Sometimes I would have to take a walk before I could tell if something was musically fit enough for the score, or just noise. One of the biggest challenges for me was trying to make both the action-type cues and the big melody theme cues function at trap-music tempos. Trap is often sort of a half-time vibe, so keeping the intensity up when it feels like the music is half as fast was a challenge indeed.

TB: I agree; blending cinematics with trap pushed me as well, and I’m glad we rose to the challenge. There’s a lot of really cool stuff in the score, and it’s born from the collision of those two disciplines. Another interesting challenge with the joining of those two styles is the actual production. I had to pay attention to how low frequencies interact with the rest of the sound. When you have a giant kick drum sound that also functions as the bass, it can be difficult to portray a chord progression to support the stronger melodic material.

Did anything in the Far Cry 5 soundtrack inspire you? Were there any musical themes from that game you wanted to preserve?

JS: We wanted to make this a completely clean start, so, if anything, we made sure that the guitars did not reflect the Appalachian type of quality represented by the guitars in Far Cry 5.

TB: I think the reason we wanted a clean start was to represent that, while this is the same geographical location as Far Cry 5, it’s a totally different world. We wanted the sounds to be «echoes» of that past world. Take the rebuilt instruments we talked about earlier. The guitar was a part of Far Cry 5’s score, and so too in ours, but the way the instrument is used in both is very different.

What are your favorite tracks? Why?

TB: In the game, there’s a track that I really liked for its simplicity. It’s a tense, stealthy cue that uses a lot of those makeshift instruments. There’s a string-thwack sound made up of a number of them. These instruments also play individually in other layers of the same cue as background texture without drawing attention to themselves, in a way I really like. For a stealth mission, you’re not looking to draw attention to yourself anyway, so it works well in that context.

JS: I think I need some distance to give you a proper answer, but the bendy melody and sound we made for the pause menu track came out especially cool, and was quite useful throughout the score. The stealthy cues were perhaps the most experimental. There are a lot of happy accidents in there. I like being surprised, so there’s a great sense of reward when I stumble on something I did not expect to find. The nature of the stealth cues was perfect for this.

TB: I really think there’s a difference in the relationship between the creative teams involved in games versus film and television. For one, the timeline gives us a little more play than some films, which feels more liberating, and allows for more experimenting. Lastly, there’s an excitement and energy that the people involved in the making of video games have. It’s infectious and really inspiring.

JS: Once in a while, we composers get a script before we get the cut of the film, and we can be inspired purely by the material in the script and the feelings we get from the story and characters. This was similar to those conditions, but in many ways even more liberating and inspiring. Because the team at Ubisoft was so gracious and excited to be working together on this project, we really wanted to make sure we were making something that left us as excited as we were when we started the project. They wanted us to make something that we thought was cool.